Good morning and welcome to Wide World of Sports’ live coverage of Day 4 of the ATP Cup and all of the other Australian Open lead-ups that are under way.

It’s a bumper line-up ahead today, headlined by the Australia vs Russia ATP Cup clash which kicks off at 5.30pm (AEDT) and includes the mouthwatering singles clash pitting in-form Aussie No.1 Alex De Minaur against Russian world No.2 Daniil Medvedev.

Also vying for main event status is our first glimpse for the summer of Nick Kyrgios, who kicks off his Melbourne Summer Set campaign against Slovakian world No.88 Alex Molcan.

The two, who have never played before, will square off at around 7pm (AEDT) and although Kyrgios currently holds an inferior ATP ranking of No.93, he’ll be expected to put on a show and easily put Molcan to the sword.

If he can do the business, Kyrgios faces a next round clash against a compatriot, with Jordan Thompson squaring off with Christopher O’Connell in their first round clash.

In the third round Kyrgios’ likely match-ups would be one of former top 10 player David Goffin (now ranked 39), American rising star Mackenzie McDonald or former world No.1 and close friend Andy Murray.

Admittedly it would take a dream run for Kyrgios to achieve that so early in his preparation and coming off the back of so little tennis last year, however a mouthwatering semi-final match-up against 20-time grand slam winner Rafael Nadal, who will make his return to tennis in the Summer Set after being sidelined by COVID-19 last month, looms if he hits the kind of form he’s often saved for his home summer. 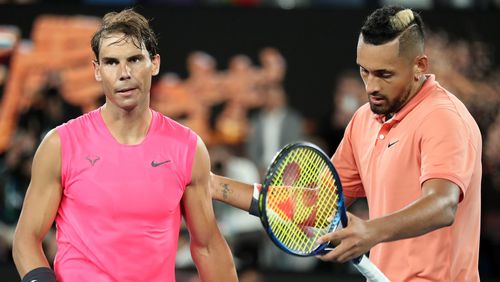 That clash is set up for Friday, however Nadal too is likely to face some stiff opposition to make it that far, with Aussie rising star Alexei Popyrin one man potentially standing in his way early in the draw.

All that’s to come, but we kick of today’s action with the two day ties of the ATP Cup, with Italy facing off against France and Germany clashing with the USA.