LIVE: Maroons jersey on the line for teen star

All eyes this afternoon will be on Warriors teen star Reece Walsh, who has the opportunity to put his hand up for a Maroons debut.

The 18-year-old has starred for the Warriors since moving from Brisbane and would trail only Ben Ikin (four games) as the least experienced Origin rookie.

And after it was revealed first-choice fullback Kalyn Ponga would miss next Sunday’s Game Two, Walsh has now found his name heavily linked with a potential early Origin debut.

While selection seems a long shot, Walsh has the talent to be an Origin player according to rugby league great Wally Lewis.

“There will be plenty of people questioning if he’s old enough and I think you’ve heard me say it 100 times: if you’re good enough, you are old enough.” 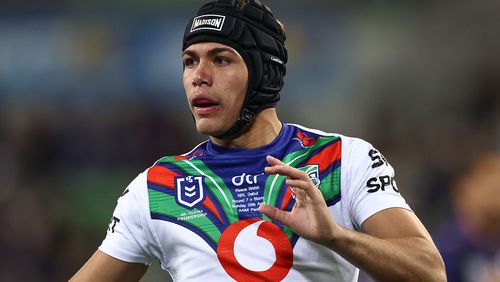 Since making his NRL debut after departing the Broncos for the Warriors mid-season, Walsh through six games already has four tries, eight try assists and six line-breaks to his name in what’s been touted as one of the biggest coups in the club’s history.

Also on the line is a spot in the top eight for the Warriors. A win this afternoon and New Zealand will jump into the eighth spot.

Previous Wizkid took his friends to dinner and spent N3.6M
Next Tope Alabi apologies to fellow gospel singer Adeyinka Alaseyori following the criticism of her record