American actor and filmmaker, Nicolas Cage has tied the knot for the fifth time to 26-year-old Japanese girlfriend Riko Shibata in a Las Vegas ceremony which was attended by his ex-wife and son

The Oscar-winning actor, 56, married Riko in an ‘intimate’ wedding at the Wynn Casino and Hotel in Sin City back on February 16.

The bride wore a black handmade Japanese Bridal Kimono from Kyoto and held a bouquet of yellow and red roses. While, Cage wore a black Tom Ford Tuxedo complete with a yellow rose buttonhole to match Riko’s bouquet. 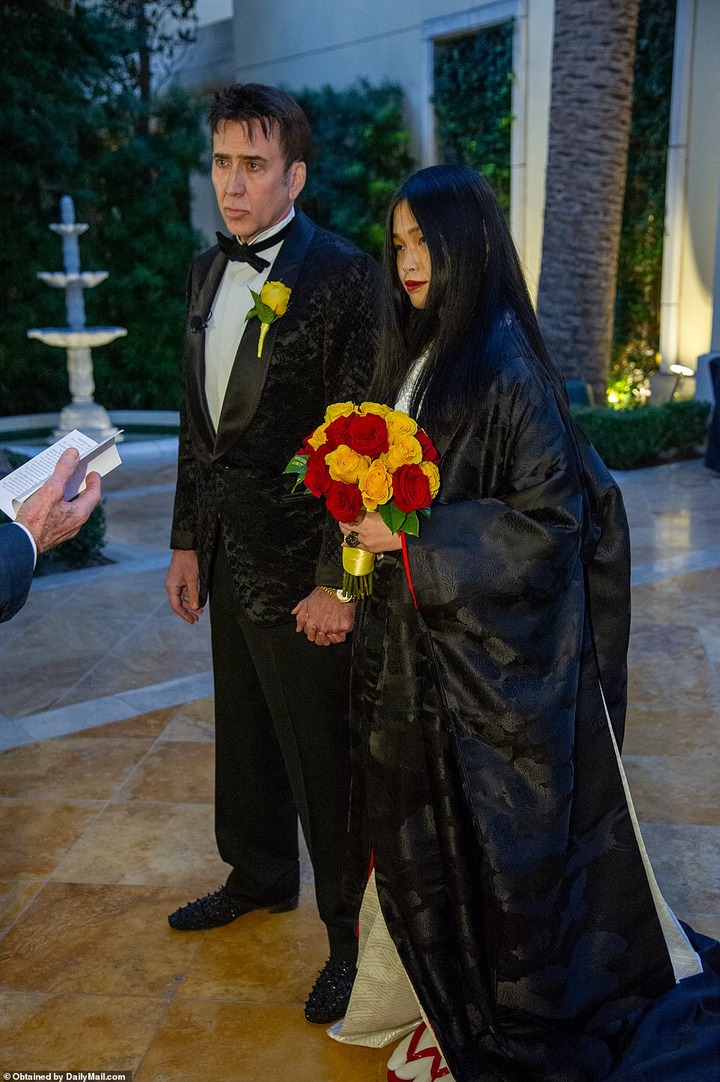 Riko walked down the aisle to her favorite song Winter Song by Kiroro before they exchanged traditional Catholic and Shinto vows with poetry from Walt Whitman and Haiku ‘sprinkled in’, a rep for Cage told DailyMail.com. 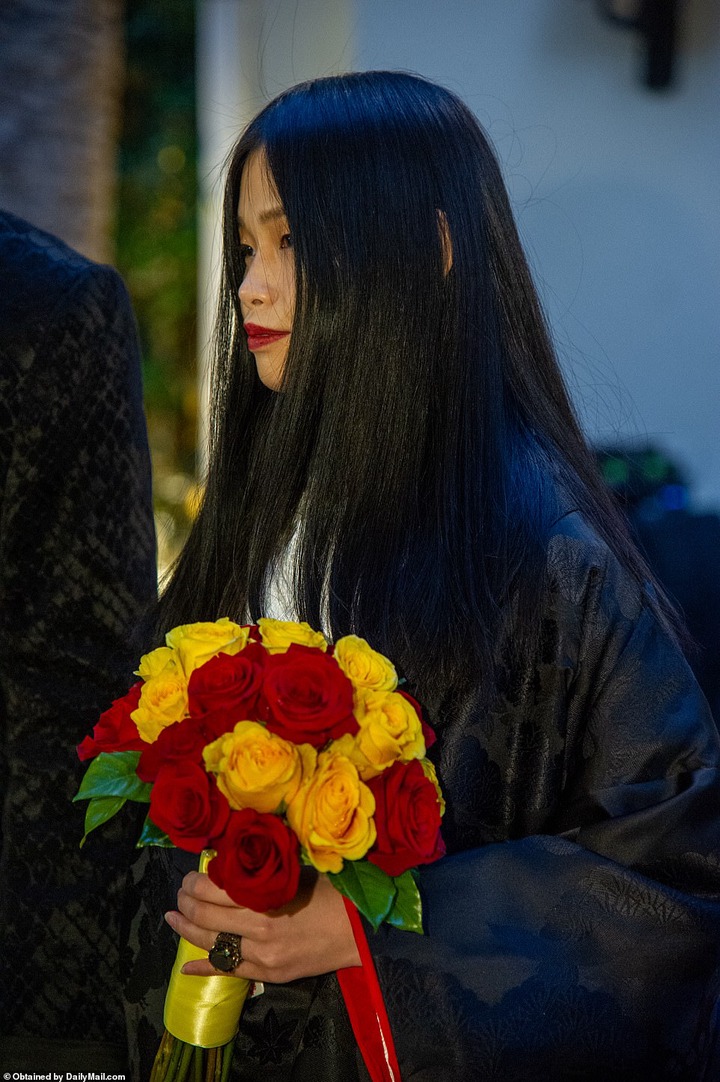 Cage, whose fourth marriage to Erika Koike ended after just four days back in 2019, confirmed the wedding on Friday March 5, and said the couple were enjoying newly-wedded bliss.

‘It’s true, and we are very happy,’ he told DailyMail.com in a statement. 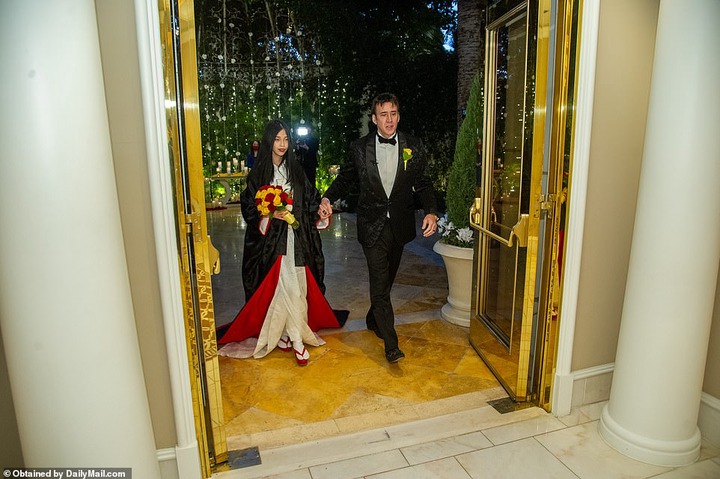 After the wedding, the bride and groom, who met in Japan, over a year ago, reportedly held a small celebration attended by Cage’s third wife Alice Kim and their son Kal. 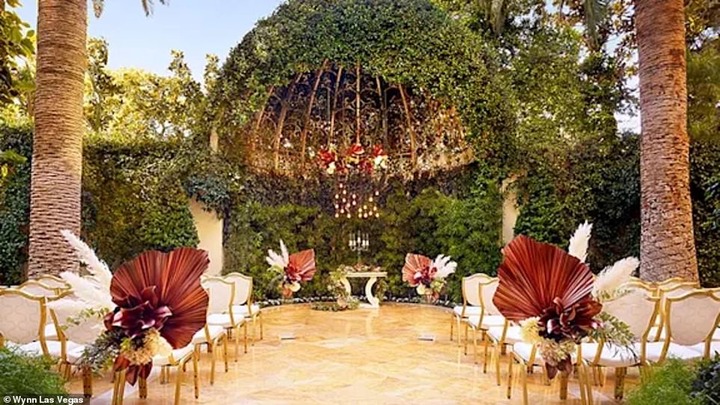 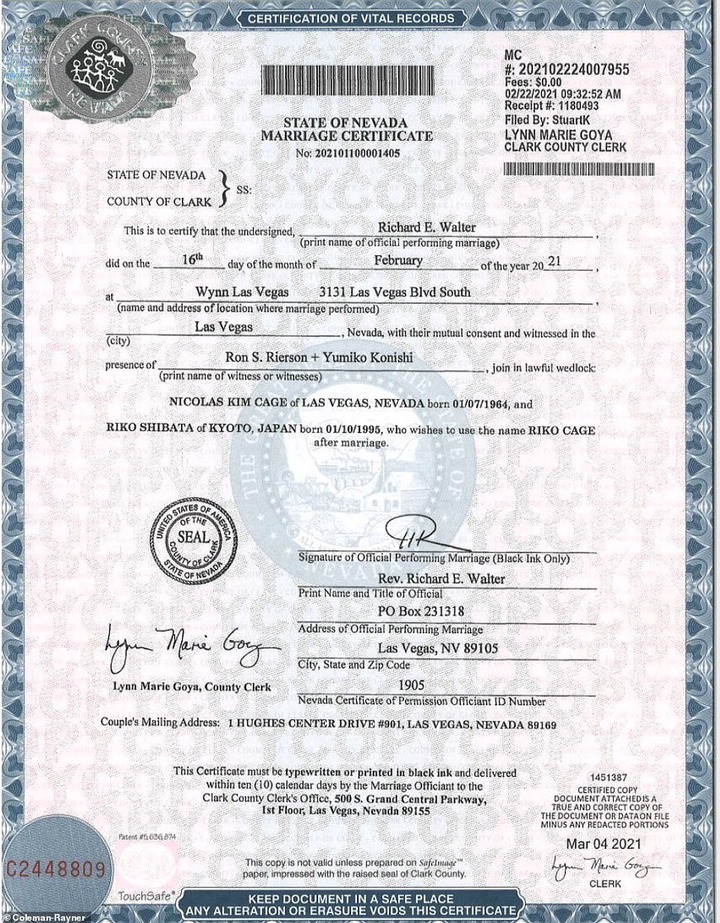 Official documents show that Cage and Riko applied for their wedding license on January 10 – the day of Riko’s 26th birthday. 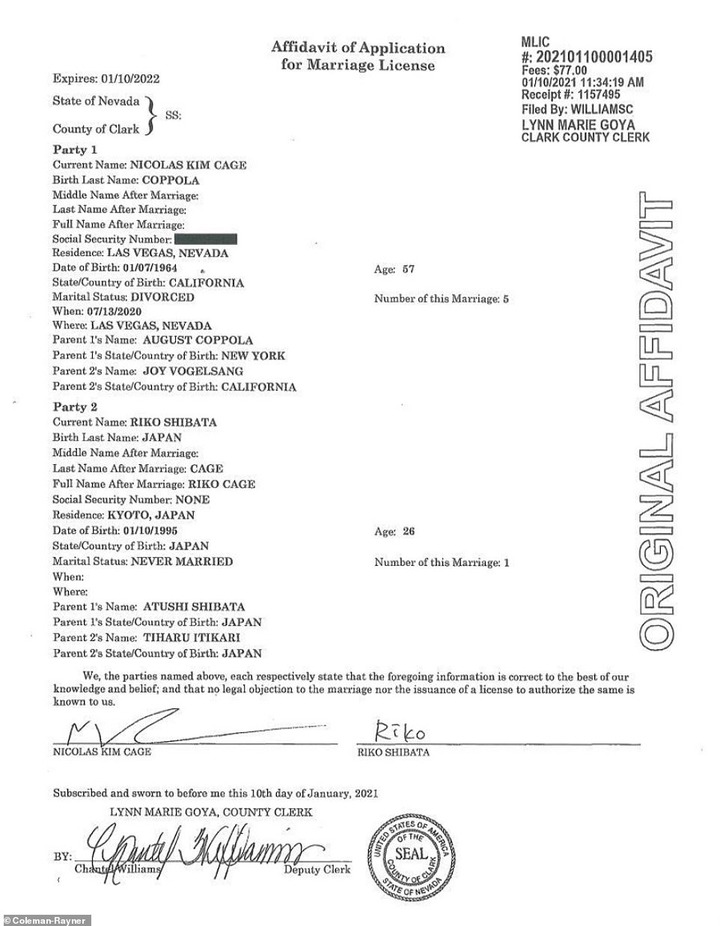 Cage announced their engagement in an interview with his brother Marc Coppola’s radio show back in August.

He said at the time: ‘She left New York and went back to Kyoto, Japan, and I went back to Nevada and I haven’t seen her for 6 months.

‘We’re really happy together and we’re really excited to spend that time together so I finally just said ”Look, I wanna marry you” and we got engaged on FaceTime.

‘I got her a black diamond engagement ring.

‘Her favorite color is black so she wanted the black gold, and the black diamond.

‘I customized and personalized it and I actually sent it to her FedEx.’ 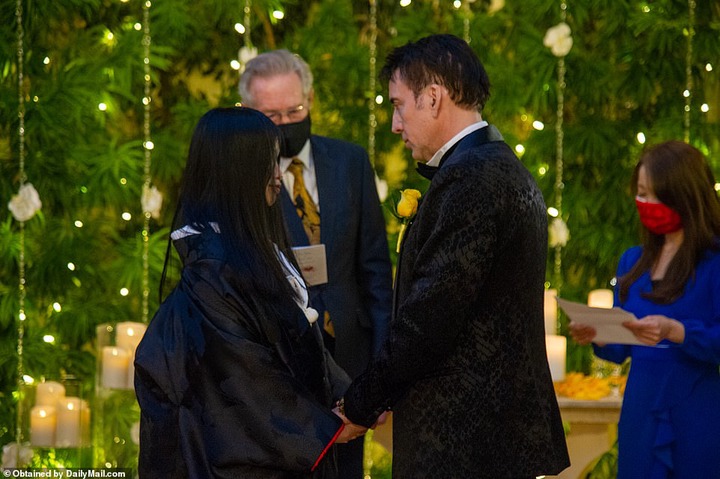 The wedding came less than two years since Cage requested an annulment four days after his fourth marriage to Erika Koike on March 23, 2019.

He married first wife Patricia Arquette in April 1995 and the couple divorced in May 2001.

His second marriage was to Elvis Presley’s only daughter Lisa Marie Presley. The two tied the knot during a secret ceremony in Hawaii in August 2002 on the 25th anniversary of Elvis’s death.

Cage married third wife Alice Kim in July 2004 after meeting her while she worked as a waitress in a Los Angeles restaurant. The couple had son Kal-El in October 2005 and announced they had separated in 2016 after it was revealed that Kim had been cheating on Cage with a Las Vegas bartender.

The actor also has adult son Weston Cage, 30, from his relationship with actress Christina Fulton.

Previous Nigerian MMA fighter, Israel Adesanya suffers his first career loss to Jan Blachowicz at UFC 259
Next “Abomination happened to us but we will keep celebrating life” – Chimamanda Adichie’s brother speaks on their mother’s death 8 months after losing father