Manly superstar Tom Trbojevic has spoken publicly for the first time since going under the knife to fix a busted shoulder.

Trbojevic suffered the injury during Friday’s loss to Manly.

Sadly, the ball that Trbojevic dived on was already dead, having been knocked on as the Eels attempted to score a try.

He says finding that out later was the most disappointing part.

“When I found that out, that really hurt me,” he told 9News.

In light of yet another injury, that looks set to end his 2022 season, there’s been suggestions Trbojevic should move from fullback to centre.

He is one of the most dangerous attacking players in the game, but has been injury prone early in his career.

But he doesn’t want a bar of that suggestion.

“It doesn’t really resonate with me,” he said.

“I’m happy playing fullback, and I’m guessing that’s where I’ll be next year.” 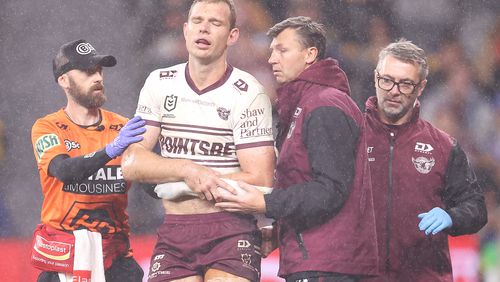